Grade: 4 1/2 stars
Story: A re-telling, of sorts, of the later King Arthur stories. Medraut is the illegitimate son of the Artos, the high king of Britain. Conflicted and damaged by evil done to him in his past, he struggles with his hatred and envy of his younger--but legitimate--brother.

Thoughts: A dark and tragic story, with a small ray of sunshine at the end which is blotted out almost completely by the preview for the next book at the end. (Why did they have to stick that in??) It reminded me a lot of The Once and Future King, by T. H. White. They were both about the world of King Arthur, for one thing. But also they both had this almost stifling mood of sadness and inevitability pervading them. (Well, the later books in The Once and Future King, at least.) 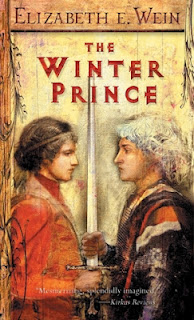 This was one of the harder books to grade, as well. As compelling as it was, it was not a book I'm likely to want to re-read--unlike The Once and Future King--which makes me want to put it in the "All right" category. Plus it could be very creepy and disturbing. But on the other hand, to own it and TOaFK at the same time, and to have the ability to pick up both and compare them when the mood takes me--that would be great. Plus there is something about this book that makes a deep impression on one, and I would like to have it to recommend to very select people. (To most people, I definitely wouldn't.)

By the way, all this comparison to TOaFK is not to say any one of them is the type of book you think of as merely a lesser version of the other. They are quite different in numerous ways, and each feels completely unique and separate from the other. The Winter Prince is short and piercing, and much more introspective and personal. TOaFK is a saga of darkness and predestined tragedy.
Posted by RED at 11:12 PM

I found that this was almost a character study of Medraut, rather than a fully developed story. I still really liked it though, but I totally get that it wouldn't be to every one's cup of tea.

Number of Books Read So Far*

Ex-computer programmer, ex-social recluse, current student of martial arts, aspiring jack-of-all-trades. Also I read a lot.
I don't have much of a memory, so I write down my impressions of the many and sundry books I've read, in order that I may remember them.
"RED" is my initials and my name, as well as being an amazing colour and a philosophy of life (read Chesterton). It is in no way referring to the communist tendency to use that colour.