Story summary: Miss Pym was only going to stay a day. The frightfully early morning bells of the girls' boarding school were far too loud, the food was too healthy to be appetizing, and she had her academic parties to get back to. But as the girls ingratiate themselves with her, she stays longer and longer. And senses more and more that something is not right... 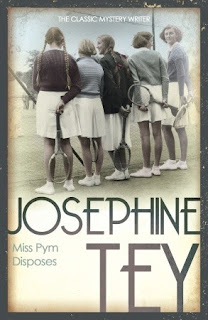 Thoughts: I forgot how much I love Josephine Tey. I love how each book has a distinct feel: the claustrophobic feel of the Outer Hebrides in The Singing Sands; the growing intellectual excitement of historical discover in The Daughter of Time; and this one, with the youthful intensity and heartiness and streak of wrongness in a girls' boarding school. I love how she focuses on characters more than mystery. This one especially was all slow buildup and a meandering study of character.

I have almost no critiques. The ending, as I mentioned above, may have seemed a bit abrupt. It felt like it was building to something for so long, and then suddenly it happened and it was over. But everything fit the characters still, and I'm not sure that it still doesn't fit the tone of the book to end that way.
There was also this slightly strange and annoying bit about Christian belief on page 227. "If you were a Christian you [...] took for granted that nothing ever happened that there was no cause for. That everyone who would be tortured incidentally by [spoiler]'s trial for murder had in some way 'bought' their punishment." This is not a general Christian belief, especially in the context that this is in, assuming that obeying the law was right no matter what. It annoyed me greatly how it was generalized to all Christians.
Then there was the racism. Fortunately it was confined to about three random comments scattered throughout the book. They didn't influence anything, and were definitely ignorable (thus not having them in the "Why You Might Not" section). And I suppose it was true to the time period? But it sucked to have them there all the same.

I don't really know whether this is a criticism or not, but she has a weird fascination with how people's faces show their character (called physiognomy, I think? This was quite prominent in The Daughter of Time as well). I mean, it's actually super cool. I have pondered it before and will ponder it again and would love to come up with some interesting theories. But it also smacks of phrenology (measuring of skulls) and eugenics and racism a bit. Plus it really doesn't sound all that scientific...

But these are all very minor. Tey is really, really great. I don't know why it took me so long to get to this book, and I am of course going to read everything else she's written.


(All these recs (that aren't Tey) start with M for some reason. Coincidence? OR SOMETHING MORE SINISTER?)
Posted by RED at 6:29 AM

Number of Books Read So Far*

Ex-computer programmer, ex-social recluse, current student of martial arts, aspiring jack-of-all-trades. Also I read a lot.
I don't have much of a memory, so I write down my impressions of the many and sundry books I've read, in order that I may remember them.
"RED" is my initials and my name, as well as being an amazing colour and a philosophy of life (read Chesterton). It is in no way referring to the communist tendency to use that colour.